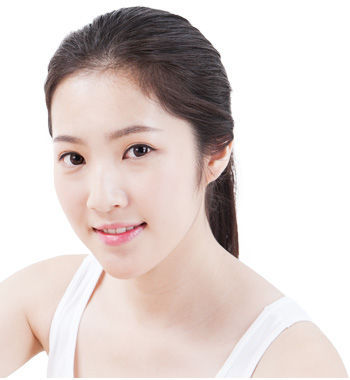 Surgery method up to your nose shape

What is customized rhinoplasty of Evita clinic?

Rhinoplasty can be said that actually belongs to facial contouring surgery. Rhinoplasty is not simply makes your nose higher. It makes your face more three-dimensional, and draws new, soft line.

If you are thinking about rhinoplasty, you should consider about the surgeon’s sense of beauty.

The overall harmony on your face is important. Also, the line of nose and forehead, distance between your eyes, the length of nose itself, angle of your lips, the angle from your lip to chin, and so on must be considered.

Evita clinic’s customized rhinoplasty is up to each patient’s own nose shape. The surgery method and component of implant is up to individual condition. Not only cosmetic result, but also we consider about functional improvement. By balancing your overall face with nose, we offer natural result which fully satisfy you.

01. What is low nose correction?

In this surgery method, the surgery will divide into nose bridge and nose tip. The shape should be improved in each area, and to be balanced on your face overall, so that it will be most ideal.

To make higher the nose bridge, implant such as silicon or gore-tex is inserted.

About gore tex, normally used in rhinoplasty for a long time, also commonly known as material of artificial blood vessel. Compare with silicon, the gore-tex is more soft. So that it is possible to make more natural nose shape. On the surface of gore-tex, there are tiny halls. Thanks to those holes, it attaches on skin easily, also fixate well.

It takes advantage of there are less movement, but as its disadvantage, it has too much adhesion, it is difficult to remove during the revision surgery.  And the height might be changed.

In other hand, in case of silicon, it won’t take such a disadvantage of gore-tex. It is more suitable to make straight nose bridge briskly.

Ultimately, first of all it is important to check each patient’s condition, and then choose which type of implant will be most suitable. Silicon has been used as an implant for a long time, so its safety and durability is already well proven. For now, the silicon is mostly used in rihinoplasty

-We correct into divided part: your nose bridge and nose tip.

-By using gore-tex or silicon, the shape of your nose will be very natural.

-You can correct your nose shape ideally, which well balanced with your face overall.

The alar cartilage on rounded sides of the nose determines your nose tip shape. This nose molding surgery is to correcting these two cartilages.

In conclusion, shorten the alar cartilage of your nose tip, and then keep together, the nose tip will be high and sharp.

If use an artificial implant such as silicon or gore-tex, the skin will be thinner and sometimes it seems reddish, when it’s severe, sometimes it poking out of the skin. In this case, the cartilage of an ear or septum is used, otherwise alloderm(substituted inner skin) can be a solution

-It corrects the alar cartilage on rounded sides of the nose.

-By using ear or septum cartilage, eliminated the side effect such as thinning and reddish skin.

-High exactitude and accuracy to make your nose tip beautiful

-Not only concentrating the height of nose, up to each patient’s nose shape and condition, sometimes make the nose lower.
So that naturalness is maximized.

01. What is blunt nose correction?

During the surgery, there will be an incision into your nostril. So that your cartilage of nose tip will be exposure. And the cartilage to be cut to make beautiful shape. Otherwise if there is a gap in alar cartilages, by gathering them the beautiful shape is made.

Also, during the surgery, if remove the rest of tissues under your skin, your nose volume will be reduced more.

-By correcting alar cartilage, your nose will be sharp and high.

-By shaping your cartilage of the rounded sides of the nose, it will be corrected definitely.

-During the surgery, by removing the rest of tissues under your skin, your nose volume will be reduced more.

01. What is wide nose correction?

If your nasal bone is in wide shape, your overall face impression seems dull. In this case, by cutting the side part of nasal bone, and gathering them together, it will be improved.

After the surgery, your width of nose will be decreased. In the case who has wide nasal bone, normally their nose width is also wide.

Ideal width of nose is to be same with gap of each eyes. If your width of nose is much wider than it, by removing the skin and subcutaneous tissue under/inside of your nostril, you can reduce the width.

-By rhinomiosis, your width of nose will reduce.

-Correcting to have ideal width of nose, which to be same with gap of each eyes.

– If you have very wide nose, by removing the skin and subcutaneous tissue under/inside of your nostril, it can be corrected.

01. What is hooked nose correction?

Normally, hooked nose is not visible in front angle. But in side angle, the middle area of nose bridge seems bulge. And the nose tip seems sagging.

The reason of hooked nose is over-growth of your nose bone and cartilage, especially on middle area. Otherwise due to accident, the hooked nose might cause.

The surgery method is, if it is not severe, the hump area which is bulged can be grind.

Or you can choose nose molding(nose tip plasty)

If the grade is severe, overall reducing of nose cartilage is needed.

– If you are not in severe case, you can choose nose molding. (nose tip plasty)

-If it’s severe, it can be corrected by overall reducing of nose cartilage.

It means your nose bridge is bent. It normally caused by accident.
The main problem of bent nose is ugliness, but at the same time there would be a functional problem as the septum is bent overall, so it makes you breath uncomfortable.

If the condition is not severe, your nose bridge can be straight by inserting silicon or gore-tex.

In severe case, the nose cartilage should be separated first, and then make them straight.

During the bent nose surgery, there should be a resection of nose bone, and they should adjust again, the recovery time will be 2~3 weeks to be fixed your nose bone perfectly. In this time you will use plastic prop

– If the condition is not severe, your nose bridge can be straight by inserting silicon or gore-tex.

– In severe case, the nose cartilage should be separated first, and then make them straight.

01. What is short snub nose correction?

When your nose tip goes upward, and your nostril exposes too much, normally we call it snub nose. As the nose tip tens to upward, overall length of nose is short.

These kind of short nose correcting belongs difficult surgery above nose surgery. The surgery method is different up to how severe condition you are. If your nose is little bit short, the implant should be inserted. And if your nose is very short, the alar cartilage should be separated from nose bridge cartilage, and have to move downward. At that empty area, the cartilage will be inserted and fixed.

-If your nose is little bit short, the implant such as silicon and gore-tex should be inserted

– If your nose is very short, the alar cartilage should be separated from nose bridge cartilage, and have to move proper area and then fixed.

01. What is long arrow nose correction?

If your nose tip is sagging, and the tip shape is sharp, it is called arrow nose.

In this case, the alar cartilage should be repositioned. In some cases, your own cartilage of back ear area can be used.

By using this method at the same time, so that your nose tip slightly goes upward.

– Alar cartilage will be repositioned and then corrected.

-By using your own cartilage of back ear area, your nose tip slightly goes upward, and then corrected.

Please have a reservation in advance in order to receive counseling and treatment.